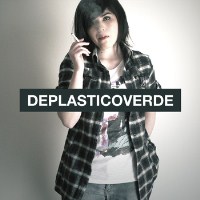 I may not understand full sentences of Spanish but there’s something about Deplasticoverde that’s quite intriguing and special.

Deplasticoverde is a special project spearheaded by Carolina Espinoza. A young Spanish artist that released her debut EP in 2010 under Ponk Records. Shaped by folk and pop influences, the album undulates with beautiful acoustic guitars and sweet singing from the artist.

Her songs are simple but they abound with meaningful vocals and some spunky attitude which is enough to make you want to listen even if you have no clue what she’s singing about.

The album comes with 8 full songs that range from upbeat to quiet. Starting with Todo el Tiempo, the record opens with a melodic number from the artist, showcasing her vocals and  acoustic guitar playing. The song slowly picks up pace as it transitions into a more powerful single filled with drumming and sparkly pianos.

Majority of the songs are in Spanish but there is one track where the singer tests out her English singing skills. Tarea de Ingles is a short, 2-minute single that is perfect for travelling across foreign lands. Meanwhile, final track, Clever, mixes hypnotic percussion with beautiful guitar playing from the artist. The song is a bit dark, taking listeners to a mysterious little trip that perfectly closes the record.

Even if you’re hesitant about listening to a foreign album, this is one piece you shouldn’t pass up. Once you’re done grabbing these, also take a listen to Carolina’s latest record, Periodo, over at BandCamp.