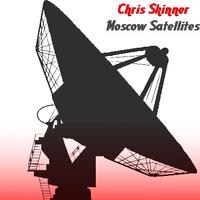 Moscow Satellites is a short 5-track compilation from Chris Skinner. This record is actually a concept album from the artist. It’s the first set of tracks he’s put together after his band 6point4 as well as Life Support ended in 2008. The record was initially released back in 2009. If you listen closely, you’ll hear that John Mayer similarity.

Of course, in my opinion, the tracks on this record have more of a personality to them. Besides, at least we won’t have to swallow all of the unnecessary information about Mayer’s love life.

Anyway, Chris Skinner definitely knows how to create beautiful cuts that are not only filled with intriguing guitar work but also coupled with his heartfelt vocals.

The record opens up on a “Mayer-esque” signature. Moscow Satellites is accompanied by smooth acoustic guitars and an even smoother vocals. The moment Skinner opens up his mouth and utters those first words, you can almost swear it’s the “Gravity” singer. One thing that makes the singer different though, is that there seems to be a deep connection with his tracks when he sings. Even though the cut is quite simple, there’s a special charm to its simplicity.

On the other hand, Rohirrim, inspired by characters from Tolkien’s novel, Lord of the Rings, is a gorgeous experimental piece that resonates with an elfish/folk sound. The acoustic guitars once again dominate with Skinner’s voice playing a subtle second. Very lovely and endearing.

Meanwhile, Daffodils, is one of the more rockish songs in the compilation. It’s one of the few instances when the artist trades in his acoustic guitars for an electric. It’s slightly upbeat and has a nice pop rock melody to it.

Chris Skinner has released several other compilations after this one. The Symphony is the first solo record from the artist while Wings EP is  his latest record after an entire year. Both records, including this one, are available for free download on Jamendo and licensed under creative commons.