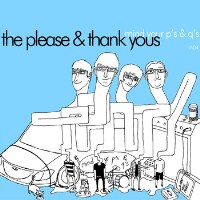 These Chicago natives describe their journey on their Facebook as “a bunch of wimps started practicing in a basement. Some left, others joined, and a couple managed to remain constant. They are playing shows, touring, and recording their sophomore slump.”

Well, those basement practices sure did pay off. The Please & Thank Yous sound is jolly punk pop, reminiscent of Goldfinger from the 90s and the many punk bands that never took themselves too seriously. It’s this carefree and honesty that makes them interesting to listen to.

Mind Yr P’s & Q’s is the band’s full length debut. It’s a mix of both old and new songs; narrating the bands personal take on the various happenings of life.

This energetic band definitely have a penchant for creating soaring pop rock songs accompanied by chanting vocals, rolling drums and fast paced guitars. The group is currently based on Chicago; they were originally from Mundelein, IL and occasionally (according to their site) teethers between being a trio and a quartet.

Opening their little power pop trip with, Be A Tree, Che?; the song cheerfully opens Mind Yr P’s & Q’s. With a rolling intro and chorus singing, it’s hard not to get into a happy mood when you hear this blaring. It’s jet like pace induces serious head bobbing or toe tapping without much prompt.

Other tracks like Dear Allie and Speaking of the Devil, are typical songs that feature a mainstream sound. It sounds like something you would hear on some alternative pop rock radio station. Meanwhile, title track Mind Yr P’s & Q’s is surprisingly a subdued cut that gives listeners a quieter version of the boys.

Overall, the album isn’t as polished as I want it to be and there are songs which I’d rather skip. However, there are some really fun tracks on here that are worth the listen. Check it out for yourself and grab the download if you dig it.