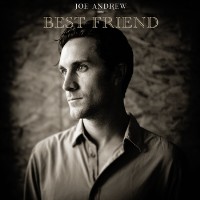 If you want some soothing folk pop to massage your tired and aching nerves, then Best Friend by Joe Andrew is the ideal record to put on.

A member of indie folk pop outfit, Ceiling Stars; Best Friend is the first solo compilation from the singer/songwriter.

Even though he’s gone solo for this, Joe Andrew still brings his resident lush folkpop with him, creating songs that are both melodic and relaxing. The album is filled with 12 easy-to love-tracks and was released back in September 2011.

The compilation also features appearances from his bandmates on bass (JK) and percussions (Sean Burke). I guess, it’s safe to say that the album serves as an extension of the band. Each track is a beautiful number that’s laced with acoustic guitars and Joe’s dark, slightly Nick Drake vocals.

Starting with title track, Best Friend; the singer makes frolicking around the woods seem like a nice escape. It’ll make a wonderful soundtrack to your brooding morning, thanks to the slightly dark atmosphere it builds up. The rest of the songs are divided between mellow dark folk to upbeat poppy indie pop. Seven Silos is one cut worth noting. There’s a nice retro feel to the song that makes it instantly familiar and likable; like something you play at a 50s diner.

Walking Tectonic and Forget to Forget, are two midtempo/slow cuts that sees the artist at his best. With an acoustic guitar on hand and melodic harmonies, it’s perhaps the most recognizable touch from the singer.

Joe Andrew can easily express his thoughts with his sound. He mesmerizes audience and gives them a great soundtrack to play on their quieter, more reflective moments. Best Friend is currently available at a pay-what-you-want option over at BandCamp. Check it out and grab it for yourself.