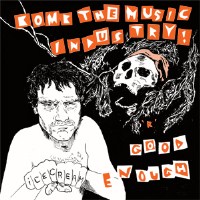 Bomb The Music Industry!/Laura Stevenson and the Cans: Split

Mixing folkpop with raucous punk rock can become an interesting combination. This split EP is one great example of how these two genres can work great together.

Both bands have been featured separately here on the Frostclick blog. Bomb the Music Industry! for their infectious record, Vacation; while Laura Stevenson and the Cans for the aptly titled, A Record. Both groups have their own style and even though they’re not in the same genre, their sound complements each other like peanut butter and jelly.

This little compilation features four songs with each band contributing one original track and one cover song from each other.

These two bands aren’t exactly strangers from each other. Laura Stevenson initially played as keyboardist for Bomb the Music Industry! (BTM!) Later on, she formed Laura Stevenson and the Cans with members of BTM! joining her. The lineup was then changed as Laura recruited Michael Campbell on bass and Alex Bilig on trumpets to join her band. This short but sweet record was done to celebrate the time the two groups spent together touring.

Kicking things off with an explosive indie rock number from Bomb The Industry!, the boys start with energy filled track, There’s my Bailout! It’s followed by, A Shine To It; an upbeat cut that features quirky lyrics. Originally by Laura Stevenson and the Cans, BTM! infuses the song with a carefree, slightly drunken feel-good singing; a good cut to listen to if you want to test out your sobriety.

The second half of the record is reserved to Laura and her band. As expected, they tone down the compilation a bit with their soothing indie folk pop. Halloween One and Two starts with a melodic quiet beauty that transforms into a collage of strings, vocals and drums. Final track, It Ceases to be Whining if You’re Still Shitting Blood, is a cover from BTM! The acoustic guitars and subdued vocals definitely add a gorgeous beauty to the song. An easy favorite if you ask me.

Overall, the short collection is perfect. The juxtaposition of genres is a exciting and both bands clearly have their own signature styles; appealing to their respective listeners. It’s a fun, enjoyable little split and one that’s certainly worth the download. Go ahead and grab this one.