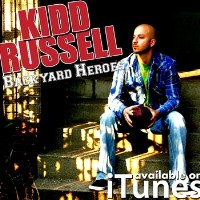 Kidd Russell’s Backyard Heroes is an interesting mix of alternative hip hop that you might want to check out. A college football player by day, Kip “Kidd” Russell turns into a rap star by night and creates an eclectic mix of some pretty sweet music.

Citing influences like Tupac, Common and 90s alternative bands like 311; it’s no surprise you’ll get a whole hodge podge of sound from this artist. Backyard Heroes is Kidd’s 3rd album and in a short time he’s found himself thrust in the limelight; opening for artists like The Roots, Common, Christ Webby, Uncle Kracker and The FLOBOTS just to name a few.

As for the album, I’m going to come off the bat and say it isn’t really my cup of tea, however it could be yours. Kidd specializes in jumping from one genre of music to another while tying it together with his signature love for beach party hip hop with a touch of rock.

From opening track, E North Ave, you get an Uncle Kracker style single, complete with strummy acoustic guitars in the intro, a steady beat, well put-together lyrics and the occasional harmonic singing. Meanwhile, Paradise, brings to mind warm, relaxing beaches thanks to its slight reggae vibe. On the other hand, Rush Rock Remix, is exactly like its title. The song seems to be an ode to Kidd’s love for alternative rock music along with his passion for rap and hip hop. It’s one of the few songs I don’t mind listening to in the album.

There’s pretty much a little something for everyone in this record. Kidd shows how he’s mastered his craft, beautifully weaving together rock, rap and other genres without so much as breaking a sweat and I’m pretty sure it will continue to gain its audience. Check it out for yourself. Take a listen and grab the download if you’re digging it. It’s all for free, as always.