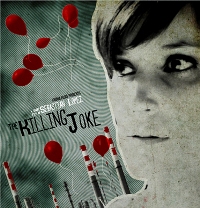 Blow your socks off with the suspense fiction The Killing Joke. Directed by Sebastian Lopez, this 15-minute film centers around a mysterious woman who discovers a red balloon in an almost-deserted street, and by a twist of fate finds herself facing her biggest fear. It stars Gustavo Marzo and Clarissa Staracci.

The movie pays homage to the seventies horror era by using classic elements of suspense. I liked how the transitions of sequences are flawless; you could really see that the team behind this worked extra hard. Every detail was not missed, from the empty bullets, the pulling trigger to the grand ending.

One standout feature of this short is its Hollywood quality despite of the micro budget production and the use of only two cameras. The color grading and cinematography is really well-done; most of the scenes would qualify for a mainstream movie.

The Killing Joke delves on the subject of fear and how it’s surrounding us. It tells us that fear is what we imagine and it’s up to us how to cope up with it.

Along with Lopez, this superb film was made possible by Sabrina Mottino (editor) and Colin Devlin (original soundtrack) under Little People Productions.

Turn the lights off, press play and get ready for a heart-pumping ride.