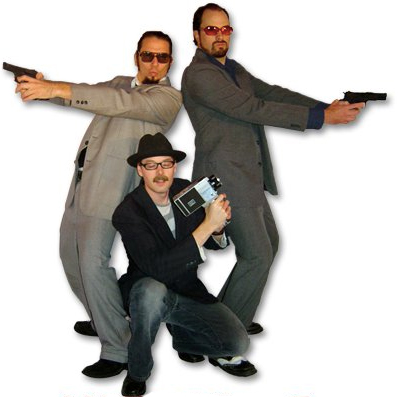 Sometimes it’s the no-budget films that are more funny and striking compared to the blockbusters that Hollywood has to offer. The Notorious Newman Brothers is one of these films. It’s a dark comedy/mocumentary that departs from typical mobster films.

The film was created by Substance Production, the same group behind the “anti-romantic comedy,”  Confusions of an Unmarried Couple.

It follows the story of an aspiring filmmaker named Max, who ends up working with two ‘mobsters’ as the subject of his documentary. Even though the film is two years old (it was released back in 2009), there’s still a flurry of interest surrounding it. It stars the Butler brothers and is directed by Ryan Noel.

As mentioned, the story is about wannabee filmmaker, Max who puts out an ad in the paper looking for possible subjects for his documentary. Unlucky for him, the only two people who seem to interested in the ad are The Newman Brothers, Paulie and Thunderclap.

They are mobsters but not exactly good at being one. In fact, they’re almost as horrible at it as Max is at being a director. Before Max realizes this though, he gets sucked into the world of the blundering duo where he becomes an accomplice to grand larceny (stealing ingredients for an Italian dish) to selling bootleg DVDs and more.

Although the story isn’t really that deep, the most fun part is watching the banter between the three characters. The dialogue will leave you laughing hysterically and enjoying much of the short film. Even though this is a directorial debut for Noel, he manages to impress. Like any DIY film though, the quality is basic at best. The film has the right amount of crudeness, mixed with humor and great music to make the film enjoyable. You can download the entire movie for free. It’ll be worth the effort for all the laughs it provides in exchange.