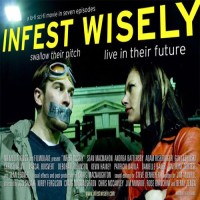 Nanotechnology gets out hand and becomes viral. Infest Wisely is a seven episode lo-fi science fiction independent film that revolves around the hazards of using nanotechnology. The film has seven different episodes coming from seven different directors although each episode was written by creator Jim Munroe. Each piece revolves in its own story, but are somehow all intertwined within the main plot of the movie.

The movie is released under a creative commons license. According to Munroe, “It was free to make, so it’s free to watch.”

Infest Wisely tries to answer what would happen to society if these little handy nano techs get out of hand. It’s a film where cats that are “infected” can essentially talk with a fluent British accent and where people’s eyes can turn into an instant digital camera. The movie is essentially set in a place where identity theft via “bodily fluids” are common and where chewable nanotechnology is a possibility. Moreover, some of these parasites actually have the capability to control a person’s mind; making the storyline more interesting.

Although you can watch each episode as it is, you might find that parts of it might not make sense since the movie is designed to be watched in its entirety.

In the end, the movie is a smart and an enthralling find in the world of indie film making. For those who will watch the film for the first time, the hand held video camera style and the excessively low budget might be a turn off. However, once you finish the film in its entirety, you’ll appreciate the smart storyline and the ingenuous ways each of the episodes are tied together. You might forget that you are watching a no-budget film.

This work is licensed under a Creative Commons Attribution-Noncommercial-No Derivative Works 2.5 Generic License.