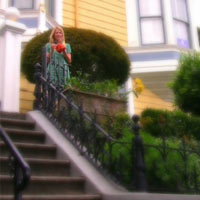 “Here. My Explosion…” is a free full feature film from Reid Gershbein & the Royal Baronial Theatre. Released under Creative Commons license, the film can be freely downloaded & shared with others – as a matter of fact, the film creators encourage it! The films soundtrack is also available as a free download (under CC license of course). Written, directed, shot and edited almost entirely by Reid Gershbein in just two weeks, “Here. My Explosion…” is a great example of what a talented filmmaker can do nowadays with little to no money.

Reid Gershbein is a founder of the Royal Baronial Theatre – a collaborative that is committed to producing full feature films in an open and transparent way, giving the viewers a chance to observe how the movies are being made and discuss them online.
A bit about Reid Gershbein:

Reid has worked at Pixar Animation Studios and Dreamworks Animation in research and development and as a technical director. His credits include Monsters Vs Aliens, Shrek 2, Shrek the Third, Toy Story 2, A Bug’s Life, Madagascar (and Madagascar 2), Bee Movie, Kung Fu Panda, Over the Hedge, and Flushed Away. He founded and was CEO the animation studio Thrave where produced, wrote, and/or directed over a dozen short animated films.

The movie is also a part of the #2wkfilm Collective, where filmmakers create a full feature movie in two weeks – from the first day of shooting to the final cut. The movies are screened in US, UK, Taiwan and online. Everyone is then invited to roundtable and twitter discussions (with the #2wkfilm tag) about the movie and the film making in general.

Update:
Reid Gershbein has just completed this second two-week feature film “The Dabbler…” You can watch it on the Royal Baronial Theatre’s website or download it here. Congrats on the second production!

Let us & the movie creators know what you thought about the movie by leaving a comment below. If you liked it don’t forget to buy some invisible air to help the filmmakers get some of their money back!