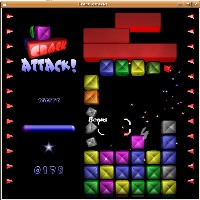 If you want to pass the time playing puzzles, then try out Crack Attack! It’s a game similar to that of Tetris and Columns. The gameplay is actually pretty easy but at the same time is also provides enough of a challenge to make it fun if you are looking for something to pass the time.

The main objective of the game is simple enough. Line up at least 3 similar colored blocks together and they disappear. Of course, it has personal quirks and challenges to keep you on your toes while having fun. So why not check it out?

As mentioned, the game is easy to play.  Thus, in order to make it a bit tougher for you, there are large blocks that fall with the colored cubes. These blocks would not turn into cubes until you manage to score a goal using one of the bricks attached to the block. Once you achieve this, the entire block would turn into colored cubes that you can use. But then, this also means that it will fill up the screen, leaving you wracking your brains out on which bricks to eliminate next.

One nice thing about Crack Attack! is that it features beautiful and colorful 3D graphics. However, it sort of seems useless since there is no sound to go along with it. It would have been great if the creators added some sound options. There are sounds that you can download if you really can’t stand the silence though.

The game also provides other features like allowing you several options when it comes to playing mode. There are multiplayer options so that you can enjoy the game with a friend.

Overall, despite its simplicity, the game is pretty fast paced and feels very solid. Obvious similarities with other games really don’t matter since Crack Attack! has its own allure by itself.