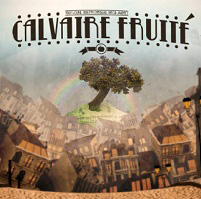 Treat yourself with Calvaire Fruité, an animated short that blends pleasing visuals with spiky chuckles.

Lined with a dark humor, the 6-minuter uses the unexpected meeting of two contrasting characters as a perfect material for its limited runtime. The story is a chase between Bold, an extremely tall character who meets Dirt, a small and sickly bum who struggles for survival. It’s directed by Ghayth Chegaar, Eddy Loukil and Victor Jardel.

The film is a near-perfect portrait of the cliché “don’t judge the book by its cover”. Though Bold has a strong physique, he has a gentle heart that nobody knew. Dirt, on the other hand, is clever and street smart. These clashing personalities spark a good story and chemistry to the short.

Technicality wise, the mixture of 2D objects in a 3D environment is eye-popping. The creators had put a lot of effort in creating a well-crafted world for the two characters.

Calvaire Fruité is undeniably enjoyable as a light short, but also works as a revealing story for the two misunderstood characters. It’s that kind of film that will deliver a consistent stream of humor, a convincing heart and an unexpected ending.