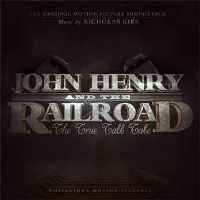 John Henry and The Railroad

Atlanta-based Whitestone Motion Pictures has done it again in John Henry and The Railroad, a remarkable short film that tells the tale of John Henry, an American folk hero whose name has been used in the struggle for Civil Rights and the Labor Movement. Legend goes that after John Henry became a freedman, he took his son to find work in a railroad construction and make a new life for himself. But little did John know that something dialobolical was just waiting around the corner.

The film was directed by Brandon McCormick and produced by McCormick together with Nicholas Kirk. It Stars Roger Mitchell (John Henry). Michael Lluma (Henry’s Son), and H Russel (Narrator).

The film offers a new narative to the old legend as it changes John Henry’s fate at the end. Using a narrator, the filmmakers adds an overall coiuntry vibe to the story. You can actually see how a great vision came to life with remarkable craftmanship.

Along with a great narrative is a full production. The scenes were shot in such a high quality that can stand along mainstream productions.

Overall, John Henry and The Railroad is a product of pure talent and passion. It revives an old legend, giving it a new twist for audience of all ages to enjoy.