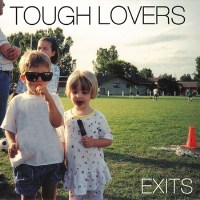 What initially started out as a solo project for Jamie Smail quickly turned into a collective. Luckily, the rapport between the members paid off and Tough Lovers has produced a compilation that is both endearing and catchy.

Other members of the band include Graham, Dane and Ryan. This Canadian four-piece proudly produce stellar indie pop rock tracks that will get your head swaying and your feet tapping from the beat.

If you want something laid-back and easy to listen to, you can’t go wrong with giving this one a listen. The boys are offering this EP as a free download over at their BandCamp site.

Starting with the Coldplay-inspired cut, Colours; you easily see the band’s capacity to entertain and create beautiful melodic indie cuts. The song exudes droning guitars, joint vocals and an overall alternative feel. It’s followed by They Grow Up, which is the longest cut on the record. This time it’s a tad more upbeat. It also makes room for sweet guitar riffs and chorus singing.

The third track is an ode to a girl named Jennifer. Filled with a cool bassline and some retro/hipster singing, this is one catchy single that will most likely get you toe tapping more than any other cut in the album. Meanwhile, the final track, Venus, carefully balances both the band’s more melodic side with their love for rock.

Exits. was released last Feb 2011. This EP might be a tad too short to fully showcase the band’s skills but it’s enough to hold your attention and convince you that the band has something up their sleeves. Some of the songs are really tight and occasionally sound off influences from anywhere like Coldplay and even 90s R.E.M. Take a listen and grab the download.