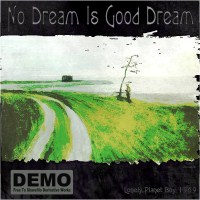 No Dream Is Good Dream runs like a 1970s rock album, filled with moody atmosphere, shady, almost whispery, vocals and an awesome indie progressive feel. If there’s anything this guy has learned from his influences, it’s collating the good and ditching the bad. Each of the 9 tracks exhibit their own personalities; the good, the bad, the quirky and the plain eccentric.

Clearly, if you love most of those artists mentioned above, chances are this compilation will become a surprising favorite.

If you love old 70s rock and adore the dreamy, progressive feel of music from the era, then this album would be perfect for you. There are so many hidden gems in this one that any 70s rock and roller can easily fall for.

The album opens up with an unusual, slightly folkish track titled, Cellar Boy. Although you might be put off by the first few notes, hang in there. It gets better. Once you get past that weird introduction, you are greeted by a beautiful piece of mellow progressive track. Meanwhile, The Last Day on Earth is a very trippy song. I guess, it creates the mood for the title. Listening to the track is what it must feel like if you live life knowing it’s going to be your last day. Moody and psychedelic; it’s like seeing Times Square during rush hour using a Lomo lens fast forwarded 10x.

Loser showcases a jazzy blues rock vibe with beautiful guitars. The vocals are at its strongest in this track compared to any other cut in the album. Although it’s not perfect, the imperfections actually adds to that drunken-singing-in-a-club-factor. Planet Earth’s Midnight Creature Show is also a great track that has that Bowie influence.

Overall, this album is pretty awesome to listen to. The fact is, if you’re not familiar with the Chinese music scene, you’d find it hard to imagine how music like this could come out from there. However, there are plenty of thriving Chinese indie musicians who create amazing songs like this, so take a listen. It’s definitely worth the shot.