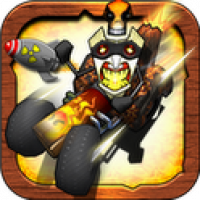 Created by Arb Studios LLC, this developer deserves nothing but a 5 star rating for this awesome recreation. The game has been created with full attention to detail and for the old-school lovers, well you will not be disappointed.

In-game players initially get a choice to select between three karts, all with varied acceleration, top speed, control, boost, weight and offroading capabilities. Simultaneously, there are also three characters to choose from: Tiki Bobby, Tiki Tote and Tiki Bah. Users can purchase additional karts and characters via Tiki $ or via the Android Market.

The game features varied circuits and boasts a hell lot of power-ups to gain that extra edge over the competition. So, if you collect a pineapple and then press the flashing ‘select’ button, then the player can get a variety of power-ups such as boosts, rockets, land mines, oil slick, stick tars, springs and fireballs. Some carts also feature special powers, under which the rockets don’t destroy them and in some there is no effect from oil and tar.

Overall, the game is really awesome and visually the graphics are jaw-dropping. A great feature on every Android and for every user who has ever been hooked to the PS1 will simply drool over this particular offering.