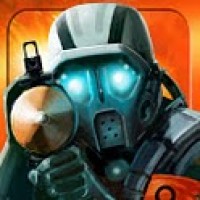 In the past week, we have seen a spur in the rise of casual gaming, but at the end of the day, developers do bow down to the hardcore HD gaming fanatics. Well, so this is it, Overkill. This game is a premium game without any lousy price tags. It is free, yes, once you have played and experienced the game, you would probably whack yourself in order to believe it.

Developed by Craneballs Studios, makers of the highly rated SuperRope, Overkill is a class apart compared to that. It is violent, brutal, tricky, visually appealing, intuitive and with large number of customization options. The game has been around for quite awhile on iOS and finally it makes a landing on Android.

In-game, players take the role of a mercenary, ready to kill everyone who acts as an obstacle in his way. The game is packed with enemies whose difficulty levels range from easy to downright tough. So in the first wave the enemies die with just one shot from a not-so-powerful weapon, but once the tougher enemies appear then even 3 shots from a fully equipped gun do little damage.

There are 5 venues where the missions take place, each venue tougher than the previous. Also, each venue has a set of 20 different waves that get harder on the player with the progress. If you are successful in clearing out all the 20 waves, then the game throws up a ‘Hell Wave’ which in my books is ‘one crazy level’.

Overkill scores the extra brownie points thanks to the guns available in-game. Every shooter will drool over the arsenal available, the war machines range from M4, MP7, HK 417, and the P90 to name a few. The buck does not stop here, as players have the full option to customize these babies to their hearts content. The guns are unlocked as you attain higher levels. Each gun can be equipped with better advancements, add-ons, scope, barrels, cartridge, and frontmouth.

Being a free game, Overkill also supports itself via in-app purchases, but here they are not forced. I could cross the first mission after equipping my gun fully without any in-app purchases whatsoever. To unlock heavy-duty guns, OM Medals are required and some of them can be acquired for free by just completing offers.

Overall, Overkill is a killer game with true HD graphics and a great gameplay system. Finally it is time for Android users to go on an ‘Overkill’.