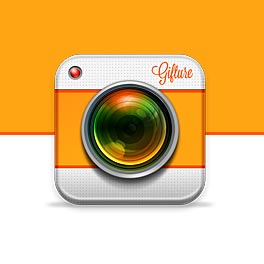 Photo editors are available by the dozens on the iOS platform, but a very few of them create a niche for themselves and leave a smile on users face. Well, Gifture is just the app that lives by this statement to the fullest and does the job in the best possible way, especially when it comes to easily creating beautifully animated photos.

Created by Toaast a developer that has been quite loyal to the App Store; Gifture is an app that does make a mark for itself and lives up to a few expectations of the user to say the least about its productivity.

On firing up Gifture for the first time, the app may appear to be just another Instagram wannabe. On the other hand, this might just work great for users who have been hooked to Instagram and now look for a much better alternative. Icons on the bottom (in Portrait orientation) direct you to different parts of the app, Feed shows your friends’ updates as well as Popular stream images from others. The Activity displays the likes, comments, and favorites for animations and users you are following, and Account lets you view and change your in-app settings.

One great thing, and possibly the most applauded feature of Gifture, is the ability to create and share animated GIFs from either your iPhone/iPod Touch’s Camera Roll or immediately from original shots. Better still, this free app allows users to accomplish GIF animations in a span of few seconds. “Choose from several awesome options to capture a sequence of photos then style it by varying the playback rate, and adding one of many filter effects to transform it into an animation you’ll want to share.”

Users can also use Gifture for editing and sharing of their individual image files, just the way they would with Instagram or other photo-sharing apps. Gifture is a good option to include, but if you are primarily looking to share standalone images, then it is better suggested to use a more dedicated app for that task as Gifture’s filter selection and its sharing options are limited.

Overall, despite sporting few drawbacks, this brand new app has an impressive level of user interaction. Also, being available only to iOS 5.0 and later, it has certain fluidity to its name. Highly-recommended for iPhone 4, iPhone 3GS and iPod Touch (4th Gen) users, especially if you want to break the monotony with some animated fun.