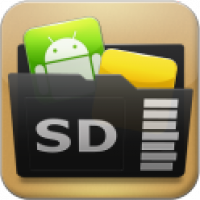 Android is one of the leading smartphone platforms out there, and the ever-growing App Market just leaves the user spoilt with choices. Apps ranging from casual-free games to hardcore 3D console action, and utility apps that make life a whole-lot easier.

With all this choice, however, there is a big drawback – and that is the storage-space. All the apps, once installed, get saved in the phone memory and not on the expandable one, taking up to much space off the already limited phone storage. Here comes in the life-savior (memory-savior), App 2 SD.

App 2 SD is very efficient in what it does. Previously users needed to check whether an app supports SD card storage, but now with App 2 SD, the app automatically moves the application to the SD card without any user-interference. Memory management issue is very streamlined with this app, and it is a must have for any Android user facing memory management issues.

When the app is first fired-up there are three tabs on the screen in which the apps are segregated. 1) On Phone, 2) On SD card, and 3) Phone Only. The task is quite simple, all apps that can be moved to the SD card appear under the On Phone tab. A user needs only to mark the given app, click on the option “Move to SD card” and Volia! its done. To move the app back to the phone, the same procedure is followed.

App 2 SD does not create much fuss with the UI either. Its neat, clean, uncluttered and simple to use. The app shows the total and available space on the Phone internal memory, as well as on the SD card. There is also an added functionality of 1-tap clear all app cache, a neat feature to keep the device memory uncluttered.

App 2 SD is available in two versions, a free one and a paid-version. The paid version does nothing great, but just terminates the in-app advertisements and costs $1.69. The biggest selling-point for App 2 SD lies in the fact, that there is no competitor or related app to it.

Android Tablets which are running Android 3.0 do not support App 2 SD; also there is known functionality problem with HTC Thunderbolt not updated to Android OS 2.3.4.