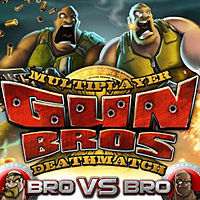 Created by Glu Mobile, this developer needs no introduction and has created a strong foothold in the smartphone gaming segment with masterpieces like Frontline Commando, Blood & Glory, Contract Killer: Zombies and a ton of other slick offerings.

The game features two protagonists, who are all out to destroy the T.O.O.L invaders. Gun Bros was always a highly acclaimed arcade shooter, with the introduction of Multiplayer mode, the game has taken a new turn and given an all-new feel to the already popular game franchisee.

The players take on the role of F.R.A.G.G.E.D who specialize in the deployment of superhuman special agents. Currently, only two active field agents exist, code-named Percy and Francis Gun. Their lifelong mission: to protect the cosmos from the Tyrannical Oppressors of Life known as T.O.O.L. The Evil organization T.O.O.L is hell-bent on infesting the galaxy with evil allover.

The evil T.O.O.L organization has decided to harvest the rare element Xplodium in an effort to create even more powerful weapons to dominate the universe and enslave the people, but all this is a distant dream if the GUN BROS are in-charge. The game is more than just fun to play and graphics are truly gorgeous in true old-school arcade style architecture.

Multiplayer option is something that will be welcomed by long-time fans of this game. In Multiplayer CO-OP MODE players can revive their added Bro in the game, then level up even faster and dominate those vicious T.O.O.L enemies. Add your favorite players to your friends list and play with them every time you’re both online. This is the biggest update ever to come to Gun Bros on Android & iOS.

Overall, the game is great and once again GLU Mobile has offered a game that raises the bar for freemium apps. A must try for every gamer who is on the Android or iOS platform, this game will provide with the whole killer experience.