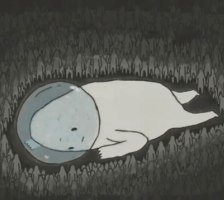 You know those days when you just need to stop, breath, and think? And what better way to start these moments than by watching Umbra, an introspective animation by Malcolm Sutherland.

Sutherland is a Montreal-based animator that have already developed a reputation with his brilliant, self-initiated short films. He is known for embracing a wide arrange of themes, from ornate space travel to Star Wars Uncut.

A finalist of the Vimeo Awards, Umbra is a curious thing to watch. It follows the adventure of a simple being to an unknown world that is strangely familiar even though he has never been there before.

One thing that’s different in this short is that the surface narrative is not the core of the film. It was used as a medium to relate a cerebral web of ideas about how everyone in this universe is transient and interconnected. It touches not only a single story, but the entirety of existence.

Technicality wise, you wouldn’t expect less with Sutherland’s creation. The animation was all hand-drawn; a mix of drawings/pastels on paper and digital animation with Toonboom Studio and a wacom cintiq tablet.

The simple, organic design poured on every frame is a key player for the short. It sets a sense of emptiness on the character, while the contrasting black and white design clearly executes his journey to the inner self.

All in all, Umbra is minimalist in style yet visionary. It’s a unique gem that you’ll be thrilled to watch and share with your friends.