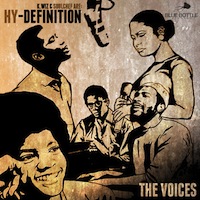 Enter a new era of music with Hy-Definition‘s 2012 release The Voices. With five tracks, the collection features crisp hip hop, RnB, and a whole lot of soul. It’s released under Blue Bottle Records, which is a label adamant to put some soul back into music.

Hy-Definition is the power tandem of producer SoulChef and lyricist K. Whiz. In The Voices, the duo pays homage to five iconic artists who have inspired them—Sam Cooke, Marvin Gaye, David Ruffin, Michael Jackson, and Selena. All of which paint a stark contrast between talent and tragedy.

Sparking up the album is Higher Ground, which opens up with an interview of Sam Cooke slowly transitioning to steady sailing hip hop beats. Featuring Trace Blam, the track showcases cohesive lines and a polished production.

My Mind (Feat. Noah King) transforms soul and funk and blends it with seamless RnB harmonies. The lush, fluid melodies give justice to the King of Pop’s distinct sound.

In Push, the duo reminds us with the sweet voice of Selena. Press play and let the track’s levity and sultriness relive Selena in a one-of-a-kind musical experience.

All in all, Hy-Definition has created a fully-accomplished album that strips down hip hop with all its bling, and let pure talent and artistry reveal itself.