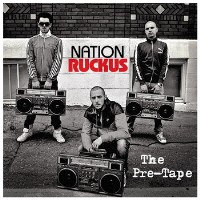 Gotta admit, how many hip hop rap groups do you know from Canada? If you answered one or two or maybe none, then here’s a great act to check out: Nation Ruckus.

The trio is a hip hop collective made up of “rapper Milk-E Fresh, beat-maker Quality and DJ WiM.” Taking a cue from groups like The Beastie Boys, Outkast and even The Roots; the boys spin their own rhymes while creating luscious and catchy beats that anyone can enjoy.

The Pre-Tape contains 11-tracks that serve as a prelude to their upcoming album. It’s available for free and meant for anyone interested in checking out their sound.

Despite dangerously bordering on the metal rap/rock edge (think Limp Bizkit/Linkin Park), Nation Ruckus manages to up their act thanks to their inherent talent for rhymes and beats. While it’s certainly obvious that they strive to capture a modernized version of Beastie’s sound, they do insert much of their personal stamp in their cuts.

The Pre-Tape serves as introduction to the crew. It contains 10 original tracks, with a ton of tongue-in-cheek wordplay, clever samples and plain catchy rhymes.

A few tracks listeners shouldn’t miss out include The Corner, Anthem featuring MuGz and Better Man featuring Mafe and a gorgeous sample of Sting’s Shape of My Heart. There’s also You Oughta Know with the Billy Joel sample in it.

Even though the album falls short in places, the group has plenty of skills up their sleeve. No doubt Milk-E Fresh is a solid emcee and that talent alone is worth checking out. However, a little more polishing needs to be done.

Check out Pre-Tape and let me know what you think of the group’s sound.