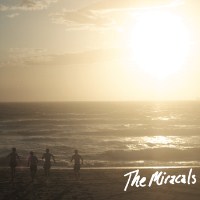 If you miss the days of surfer rock music, rest assured, you’ll be able to relive the nostalgia as you listen to The Miracals. (Yes, their name spelling is a bit weird but their music is quite pleasant.)

All four members are college students from Southern California. They initially called themselves, “The Smiles” but for legal reasons changed it to The Miracals. They like to describe their music as “beach rock” or the more quirky “tropical grunge,” gathering influence from one of the bands that shaped the genre, The Beach Boys.

Hermosa EP  is a nice compilation that screams of summer fun. Even in the dead of winter, it’s perfect for bringing some sunshine to dreary mornings.

Mixing in bright sunshine and a happy mood, Hermosa EP is perfect for soaking up the sun on a relaxing day. Kickstarting the compilation is the chanty and catchy Cala Cola. An obvious reference to the infamous drink while at the same time a song lamenting about lack of financial stability. After listening to this several times, the song grows on you and pretty soon you’ll find yourself singing along to the cheery beat.

The track is than followed by the equally brimming Sun, which showcases the bands inclination for upbeat, poppy songs. Much of the other tracks like I Could Love You More, Girl I Love and California Girls exhibit a Vampire Weekend vibe but the band manages to retain their distinctive style; creating songs that are tight and filled with a feel-good atmosphere.

Hermosa EP might be short but it does a great job at stirring interest for the band’s music. The songs are likable and doesn’t really need much coaxing to fall for. Take a listen and grab the download.