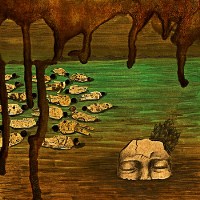 One of my favorite indie album find of late, Pat Parra’s Lowered is a beautiful and convincing debut record from the San Jose native.

Released on BandCamp last June 2011, the album plays host to a multitude of genres and moods. You’ll get a bit of 90s alternative, R&B, soul, anti-folk and even a few heavier indie rock pieces. All of which float around before successfully coalescing into sweeping guitars, moody electronics and intriguing vocals.

The album was mastered at Different Fur by Patrick Brown and shortly after the release, Pat debuted a music video for the single, Forget Your Love.

Lowered is a lot like listening to an indie version of Radiohead during The Bends era. The songs are lush with instruments that feel orchestral in places. It’s coupled with Parra’s hypnotic but seemingly detached vocals; giving most of the songs a haunting and somber atmosphere.

Opening with Forget Your Love, the track is the longest one in the album. Unlike much of the later cuts, this one has a more upbeat and cheerful indie acoustic rock vibe. The reverberated and melancholic vocals add a slightly heavier atmosphere to the song but it’s beautifully balanced out with the catchy rhythm.

Although most of the record features attention worthy tracks, the few that you shouldn’t skip out on include the electro acoustic cut, Mine Enough. The song is dark, with Parra’s vocals dominating the mood. Title track, Lowered, is another single to indulge in thanks to its sweeping instruments. Meanwhile the final cut, My Soul is perhaps the most Thom Yorke-sounding track in the compilation.

Overall, Lowered is an excellent record to have especially if you need some company for dark and dreary days. It’s an album that’s worth hearing and best of all it’s available at a pay-what-you-want option. Take a listen.