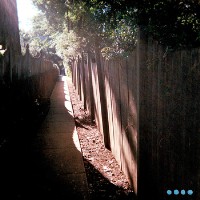 Ushering a flow of smooth indie teen pop that’s accompanied by syncopated guitars and sprinkled with rock elements; Meridian is a record that easily creates a good impression.

The group responsible for this sweet and melodic compilation is Brooklyn-based quartet, Pinegrove.

Even if you might not like it straight away, it’s an album that grows on you, slowly embedding itself as it hauls along its lush sound.

Sweeping and beautiful indie pop is one way to describe Pinegrove’s sound. Influenced by artists such as Bon Iver, Radiohead, Twisted Sister and Wilco; it’s easy to see where the melodic songwriting and harmonies come from.

They released one single (Over My Shoulder) back in 2011 and short EP called Mixtape One, back in 2010. Meridian is the latest compilation from the group.With this new album, the band expands their sound to create catchier and more melodic tracks that ring with charm at every turn.

Palisade opens the record. The song sways along to gorgeous guitars, deep bass lines and a mildly uptempo beat. All this beautiful instrument work is enveloped in hazy and beautiful singing. Meanwhile, cuts like Peeling Off The Bark, conjure up a quiet moodiness to the album. Again, it features some of the best vocal harmonies you’ll find in any compilation. Sunday, caps everything off and brings the brilliant album to a sweet close.

What’s enthralling about this one is that each song manages to stand its ground. If released individually, they’d serve as great singles but at the same time, they all resound with coherence.

Carefully mixing genres while throwing in unexpected rhythms and applying consistent vocals, Meridian is a nice record that will enchant listeners from beginning to end. Take a listen.