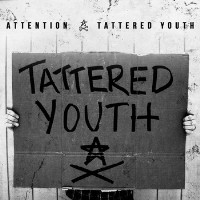 It seems there’s no stopping rock band, Attention, as they release their latest compilation album, Tattered Youth. They hit the pages of the Frostclick blog a couple of months ago with their previous alternative rock offering, Through the Wire.

Still containing catchy alternative tracks, this new album features 12 cuts including a music video for the title single. The boys are also offering this one for a pay-what-you-want download over at their BandCamp page.

Tattered Youth is littered with punchy rock singles along with a mix of pop rock. Starting the album is Never Know; a mid-tempo alternative rock song that combines guitars and raspy vocals from singer/guitarist, Jeremy Tappero. Title track, Tattered Youth, comes in second and serves as a great anthem. The boys recently released a video for the track which involved many of their fans and listeners.

Even though the boys are straight up rockers, they do offer a quieter/more mellow side in cuts like, A Little Song which is an acoustic pop love song; Can’t You See Me? which is essentially a hearfelt piano ballad; and Out of My Hands, whichÂ is another slow yet melodic acoustic track.

Attention is definitely getting quite a bit of their namesake thanks to their penchant for creating catchy music that most alternative and pop rockers can easily enjoy. Take time and listen. This will be worth the download.