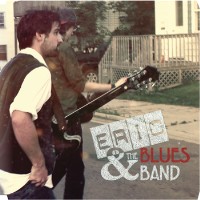 Eric and the Blues Band

Eric and the Blues Band isn’t really as straight up as you would want them to be. For one, there is no one in the band named Eric and the group rarely plays straight blues. On their Facebook page, they mention that “Eric” is a fictitious persona created by Nick to “hide behind to protect himself from his mounds of tax troubles, and paternity suits. By naming the rest of the guys “The Blues Band”, Nick created an environment where he can fire anyone at any time, for no reason at all, and still keep the same name!”

It’s cheeky story but nonetheless, doesn’t interfere with the fact that the band features some seriously catchy blues pop rock in this record.

With a witty touch, the album flourishes with gorgeous rhythm and catchy beats. Opening single Get Me My Sweater, is one of the more blues inspired cuts in the album. Featuring great guitar work, the song starts off mellow before transitioning into a full-on blues rock fest.

Second track, The Postman, is a personal favorite. Armed with cheeky lyrics and a summer pop rock sound, the song is fun to listen to. On the other hand, Sally, explores the band’s midtempo groovy side while Ethanol Girl, takes it up even slower with complete vocal blends and harmonies that complement the instruments beautifully.

This self-titled debut certainly contains enough charm and wit to entertain. More than that, the instrument work and catchiness of the tracks are top notch; making this a great record to have on your player. Check it out and see if you feel the love for this one as well.