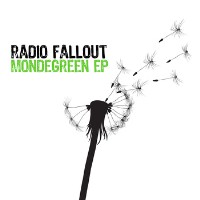 Radio Fallout managed to achieve quite a feat considering they’ve only been in the industry more or less 5 years. In just two years since they formed in 2008, the group already managed to snag slots, performing in various prominent stages in and around Austin, Texas.

The following months saw the trio of, Jonathan Palmer, Dan Walker  and Caleb Scates, pursue their careers vigorously. By 2009, they recorded Mondegreen EP, which was self-produced by the boys along with Tim ‘Tank’ Casterline.

Combining an indie and alternative rock feel, Radio’s Fallout’s sound makes them an easy favorite. Presenting 5 tracks that boast of raw guitars, grungy vocals along with a somewhat poppy catchiness to them, Mondegreen EP is a treasure trove of easy listening cuts.

Opening the short compilation is Out of Sight, a single that carries a nice hook and hints at the band’s capacity to weave together pop rock beats with an alternative taste. Following closely is, I Wish I Could Tell, a single that calls to mind the easy pop rock sound of Jimmy Eat World.

Influenced by bands like Foo Fighters and grunge forefathers, Nirvana; this affinity goes full display in Hurricane Song. Featuring heavier guitars and louder drums, it’s great to see the band let loose. The remaining tracks, Thursday and title track, Mondegreen, caps off the record in a much slower yet still rockish vibe.

Overall, it’s not hard to see why Radio Fallout’s success is climbing.  The band knows their hooks and can easily churn out classic style, catchy alternative rock that any music lover can enjoy. Grab the download and share the word. Enjoy!