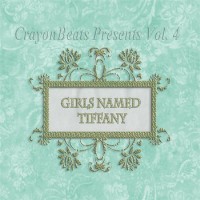 What started out as a personal space evolved into a haven for music, fashion and the arts. CrayonBeats is an online site that compiles and promotes musicians from across the globe. Spearheaded by two girls named Tiffany, the site was set up in 2006 and has evolved throughout the years.

CrayonBeats Presents Vol 4 is the site’s latest compilation album. It includes some of the best musicians with Tiffany in their names and features 10-tracks that range from acoustic pop to hip hop. The album is  also offered absolutely free and licensed under a Creative Commons License.

Expect nothing less than some of the best R&B tinged tracks from this compilation. You’ll find cuts from indie artists like Joi Tiffany, Tiffany Ivey, Tiffany Joy and Itz Tiffany, to name a few.

I Get Ill is a nice, smooth and slow cut reflecting on personal thoughts while Only Girl in the World by Tiffany Bell is a Rihanna cover. Her version is much slower and adds a depth that the Rihanna version doesn’t have.

Meanwhile, Take A Number from Tiffany Joy is one of the more upbeat cuts on the album. The Buenos Aires-based singer first started in 2002, releasing her debut compilation Return to Bliss. On the other hand, fulfilling the rap slot in the record, Itz Tiffany, contributes Fake London Boy. A fun and uptempo rap track that rounds off the album nicely.

Crayon Beats Vol 4: Girls Named Tiffany is a rich compilation that brings in a lot of indie artists to the fore. Chances are you’ll find an artist who’s music might become a staple on your playlist. Grab the download for free and make sure to check out their site as well.