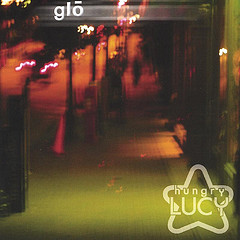 Last year I featured Hungry Lucy’s 2006 release Before We Stand—-We Crawl. While this appeared to have been an experiment with Creative Commons licensing, the band found the experience enlightening and has released a video (below) to explain why they endorse CC. It is great to see a really creative group like Hungry Lucy, especially one that is celebrating 10 years of existence, recognize the benefits of this form of licensing and distribution. Since then the band has made the decision to release other albums that are under their control through a creative commons license.

At this time, Glo and Teatime Sessions are now legally available for free downloading and listening.

Glo is their second release. While the music is trip-hop on the surface there is a gentler side to these songs that practically floats to your ears. Christa Belle and War-N Harrison work together seamlessly to make a collection of music that is easy listening in the best way. War-N’s production talents are quite evident in his string-like electronic arrangements and his subtle use of effects. This free online release is actually 2 discs, one of the original material and another with imaginative re-mixes by other artists. The remixes are good but I greatly prefer the original material.

If you like the music buy their CDs, not only to support the artist but also to show your support of the practice of Creative Commons licensing and distribution.