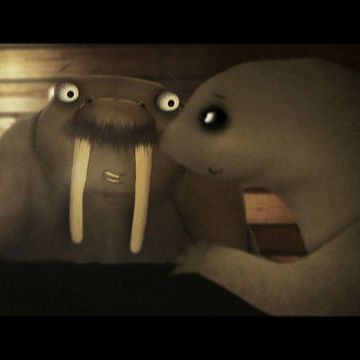 Watch an arctic love triangle between a walrus, a seal, and a lobster in Cooked. This 7-minuter animation is directed and designed by Jens Blank, produced by Tom Legget, and written by Caroline Brucker. Cooked became an official selection in the Cannes Film Festival last 2010.

Boasting enough wits and laugh to stand on its own, the short is a charming animation that caters to all audiences. The film sticks to a straight line narrative that’s easy to follow. Its light and accessible narrative, charming creatures, and slapstick humor makes this a treat for the whole family to enjoy.

The stronger suit of this film is the visuals. With crisp images and smooth body movements, the high quality of animation can be at par with mainstream animated films. Scene after scene, the film bursts with detail, soothing color palette, and texture that makes Cooked a pleasurable watching experience.

Cooked is yet another marvelous and silly love story that hold its own lovable characters and humor. This is the kind of movie that’s perfect for kids, or even for the kids at heart.