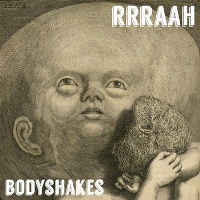 Hold on to your seats as Bodyshake‘s latest musical offering Rrraah is commited to throw drumsticks, break some strings, and channel everything that is great about classical rock.

Hailing from Montreal, Bodyshakes is a four-piece band that infuses hard rock and blues into a hard-kicking sound that’s unique to the band. In Rrraah, the band offers five tasteful tracks that will surely add some crunch in your bland, monotonous afternoons.

First stop is Save Yourself, which features heavy riffs and an easy-to-digest arrangement. Press play and let this sonic gem uplift your energy. Buoyfriend follows with a dark churning intro that shapes an overall mood of the song.

Serving as an icebreaker from the rock tunes is Lonesome Lullabye, a slower gentle piece that’s really brilliant. I love how the band can shift and adapt into different phases without giving up their own sound.

The only flaw that I can see in this album is that it leaves you craving for more songs. Rrraaah is a roaring release from Bodyshakes, proving that they know what they want and can really deliver. Bodyshakes is certainly a band to watch out for.