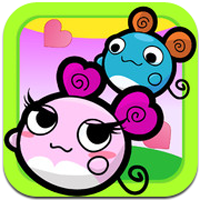 So for Android and iOS users, there is another Angry Birds-like present just for you. Bouncy Mouse takes all the cues available from the Angry Birds franchisee and tries to hold a certain ground. Is it successful or not, that is yet to be seen.

Created by Munkadoo Games LLC, the developer has only this particular game under-their-belt needless to say, however, it makes for a really good time-killing machine.

In-game players need to retrieve a Big Chess stolen by Captain Cat who has brought total mayhem into the peaceful world of Mouse Island. So it is up to Bouncy Mouse to go out and save the day. The developer said it right, it is a big task for a small mouse. Gameplay is not very interesting, but at the same time it is not bland.

In Angry Birds people use a slingshot, well here, it is Bouncy Mouse’s tail that helps him to fly from point A-to-Point B. The game packs-in 46 visually-appealing levels with 5 world locations. Bouncy Mouse has its own share of obstacles being Spiky Bees, Bouncing off Bumper Birds, and eating as much cheese as possible.

Bouncy Mouse is a well created physics-based gameplay, but does lose on a few fronts, though that can be ignored. There are few secrets in the closet that can be unlocked by collection 100% cheese in each level. The game also sports in a challenge mode, under which players would need to beat a level in a limited amount of launches.

Overall, the app is great and packs in a punch for all the casual gamers out there. The free version is ad supported, but if you hate ads, you can purchase the app for just $.99!