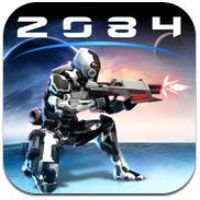 Rivals at War 2084 from publisher Hothead Games is a major upgrade over the original Rivals at War, and this one has a sci-fi theme, and the card collecting aspects have been improved too. The game is kind of like collecting baseball cards, but it’s a lot more fun and has a lot more action.

All the matches against opposing players are automatically set up, and the results are determined by the stats and if particular tactics have been used or not. In Rivals at War 2084 everything can be activated without any input required from players. Rather than worry about the reaction time, your focus will be on getting more and more tactics, equipment and soldiers via card packs.

As your team becomes stronger, you’ll end up winning more battles, and this allows you to get more powerful cards and fight bigger battles and so on. Not only is the gameplay compelling, but the graphics are very good and much better than in the original game. The lighting is very good, and the models are extremely well detailed.

All aspects of the game have been retouched and there are a lot of improvements in the game. Most notably, you can now obtain powerful equipment for your soldiers rather than useless items. While some games will require you to buy IAPs to get the powerful packs, here you’ll get the powerful Silver card pack by just completing five missions quickly. In addition, the game has a brand new campaign mode that allow for some exciting PvP battles, and if you complete those missions you get special rewards.