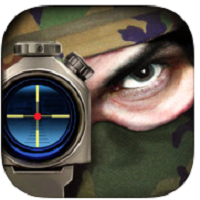 Kill Shot is one of the better shooters for the Android and iOS available free today. Developed by Hothead Games, you play the role of a special covert ops soldier who has to undergo dangerous missions and military operations. However, you’ll be in good position to do since you’ll be armed.

Kill Shot will require you to travel deep into enemy territory and take down targets, and you’ll need to make full use of your rifle scope to make sure you hit the mark. When you do find the target, zoom in and shoot. You don’t have a lot of opportunities so you need to make the shot count.

Kill Shot is a large game, and you can literally spend hours on this one as you try to complete all the missions. Fortunately the early levels are simple enough and will give you the hang of the controls and gameplay. The controls are easy enough to learn, and the graphics are top notch, keeping you in it. The guns in particular are well-made and
the way it reacts after you fire is really nice.

There are 18 different maps in Kill Shot, and you also have several locations to go to. As far as weapons go you can choose from sniper rifles, shotguns, assault rifles and many more. The more kills you make the more weapons you’ll be able to unlock. There are also special items like slow-mo for making easy kills, bullets that go through armor, spotters and more.