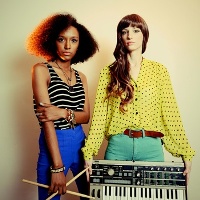 Turn up the volume and bathe in tribal dance tunes with OKAPI SUN‘s self-titled debut release.

The group is named after the Okapia johnstoni, a giraffid artiodactyl mammal native to the Ituri Rainforest which decorates itself with its different stripes to become one with its surrounding. Just like the said animal, OKAPI SUN’s sound is described as a cut and paste of their past, their present, and their own culture and soul.

The two-women group is composed of best friends Dallas and Leo who have been travelling over Europe and USA for the past year and finally met and collaborated in London at a suburb train station.

In this album, the power duo treats us with samples of tribal beats, electronic tunes, and garage rock to produce four unique tracks that are fresh to our ears.

Johnny Kiss opens the album with a steady electronic hook that serves as a solid base for the piece. Get lost in psychedelic high as each edgy, sharp tune is balanced with low-key tribal drum beats.

Following with a combination of electro/video game-sounding beats and garage rock is Expensive Me. I love how the album drifts into a heavenly, almost ambient sound, without losing its own kick and energy to start up a party.

In Wasteland, OKAPI SUN further establishes themselves in their chosen genre as this polished track is both catchy and skillfully done. Sink your teeth in this combination of rhythmic vocals and blooming electro melodies.

It’s Cold Outside closes the album with steady chill-out tunes satisfying that trippy high. Listened to in the right environment, this piece provides an excellent background music whether in a cold rainy night or coffee after a night of dancing.

OKAPI SUN‘s debut album is absolutely rewarding as it presents genuine talent, a well-executed vision, and killer materials. There’s a great future ahead of these girls, and this is just the beginning.