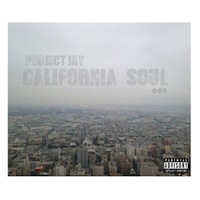 Following the footsteps of the great rappers such as Public Enemy’s Chuck D and the Notorious B.I.G., Project Jay is a sensational rapper who was born and raised in California.

With his flawless rapping and introspective lyricism, Jay is one of the freshest talent of the hip-hop indiescape.

Jay’s confidence led to a thread of frenzied appearances on neighborhood mix-tapes. His talent got the attention of Top Dawg Entertainment boss Dude Dawg and eventually earned deals that gathered massive following.

The Golden State, California, has been his inspiration in producing outrageously incredible songs. Thus, producing his album entitled, California Soul.

Banging in number 1 is California Soul. The storytelling he does in this song is delivered with compelling lyrics perfectly paired with booming beats that celebrates in your ears.

Drive Slow on the other hand, has a distinctive flow, thus, adding an impact to its character. It has a catchy rhythm, the one that listeners cannot easily forget.

Ending the album in style is Sound Providing. This track is a living proof that Jay has got what it takes when it comes to delivering goodie gritty lines.

Project Jay’s journey to the music industry had given him so much inspiration to write rich but accessible songs. California Soul is just one of the many testaments to his success.