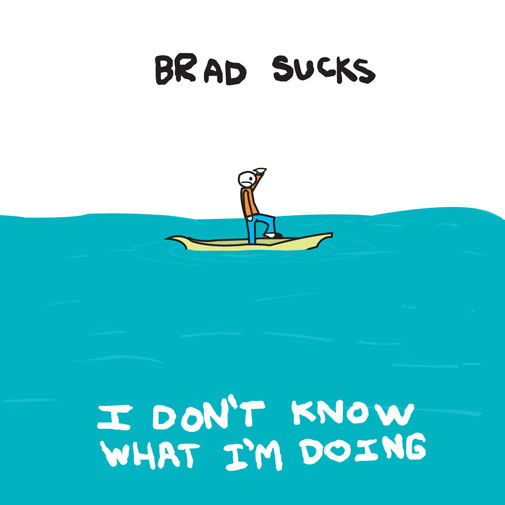 The brainchild of Brad Turcotte, this one-man band hailing from Ottawa, Canada is focused on writing, recording, and producing tracks that are available for listeners to download and share. In 2001, Brad Sucks started using the Internet to spread his music to a wider audience. Some of the his tracks have already been used on television and played on various radio stations. Brad is also involved in the open source community designing open source packages for musicians.

Intro track Making Me Nervous may just be the most hooking song I’ve ever heard in years. Layered vocals coupled with rhytmic electro beats and subtle guitar riffs makes this track a pleasant energy booster.

Look and Feels Years Younger follows with a darker approach. Hazy vocals that slowly builds into a poweful chorus adds a grungey flair to this sonic piece. Bad Attraction, on the other hand, screams “love, sex, and rock n’ roll” with its traditional rock arrangement and edgy guitar play-ups.

In Sick as a Dog, Brad Sucks returns to it steady electro sensibility showcased on the first track. This is the perfect soundtrack to a lazy afternoon.

Traversing quite a different mood, I Think I Started a Trend explores the territories of rock acoustic. I personally like how the album tones down but still maintains its edgy rock vibe.The collection closes up with Work Out Fine, an emotional yet soothing rock melody that will definitely calm the ears.

I Don’t Know What I’m Doing is a one-of-akind album that’s jam-packed with unique tracks that stretches and challenges Brad Sucks’ rock capabilities. If you’re looking for one-of-a-kind yet soothing rock tunes, then this is your lucky day. So download, press play, and let these chil-out songs work their magic.