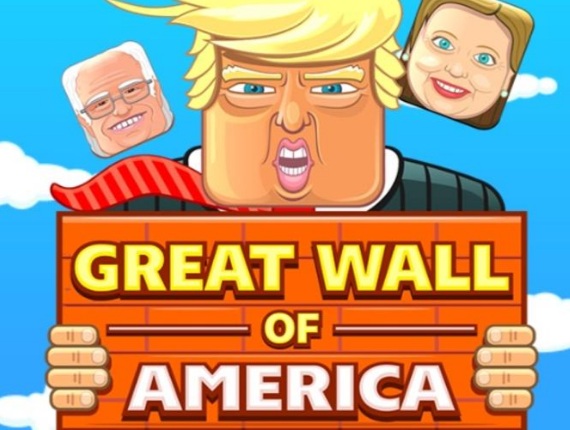 It should hardly come as a surprise that Donald Trump has become the basis for a number of parody games on mobile, and Trump’s Wall by The Blu Market is one of the better ones. These games are all parodies of course, but what makes this one different is that it is quite entertaining.

The premise of Trump’s Wall is simple, and it is basically a falling blocks puzzle game. Your character (Trump) is building a wall (in reference of course to Trump’s own pronouncements). Here however, you’re building the wall around the Trump mansion to keep ducks from messing it up.

You build the walls by stacking them together. The goal here is to keep the blocks from toppling over, otherwise you need to start over. It’s simple enough but a lot of fun: it’s easy to control the crane from where Trump is dropping the blocks on a pile, and the higher you put the pile, the more points you score. If the blocks come tumbling down, it’s game over and a “You’re fired” message pops up. This is just one of the many jokes that are in the game, and it’s one of the reasons why this is a lot of fun to play in the first place.

Trump’s Wall is far from what we would call a classic, but it’s an enjoyable one and well worth a try. If you’re into parody titles and don’t get easily offended, then this should be right up your alley.