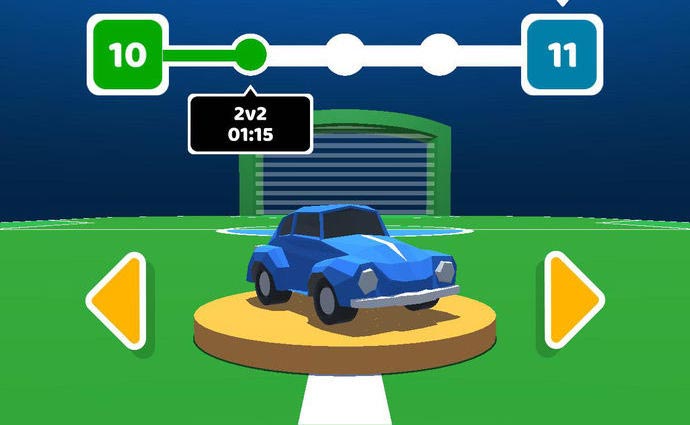 Good Job Games has hit it big with Hyperball, which is currently one of the most popular games on iTunes. Part of the appeal is the objective, just score more goals than your opponent using your car to push a ball. Add the one touch controls and multiplayer, and you have a winning combo.

When the game starts you can choose the color of your vehicle then the game begins. Drag your finger so your car nudges the ball towards the opposing goal. Think of this like soccer or Rocket League and you get the idea. Put the ball in the net and you score.

With the drag to move mechanism it seems Hyperball is a piece of cake, but you might be surprised how hard it can be to score. You need to play several times before you can get the hang of it, but this is going to pay off.

The graphics are apt for the game, and competing against other players is a blast. To get ahead it won’t hurt to try different strategies. Rather than directly attack the opposing goal for instance, you can hit your own goal’s bar. This causes the ball to bounce and may land in the opposing goal.

What makes Hyperball a blast is you can shoot in different ways. Aside from the method above, try aiming at angles. if there is an opening you can just head on into the net and go for it. Aside from scoring, make sure to defend your goal so other players won’t be able to score.