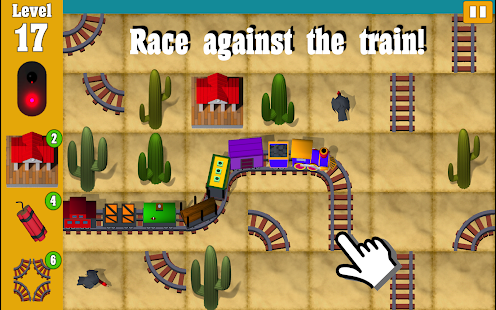 Train Party is a multiplayer game from Funside Games. Made for 2 to 12 players, it’s a casual game that encourages teamwork and cooperative play, though competitive mode is also present. Like any good mobile game, Train Party has a very simple control mechanism so you and your friends can quickly get into it. And once you do it’s going to mighty hard to stop playing.

The goal is to keep the train going for as long as possible. Players drag rails for the train to cross. In some instances you have to move animals and other objects out of the way. Once you’ve done your part it’s up to the next player to set down the tracks and ensure the coast is clear for the train.

If a player fails to set the tracks on time the train will crash, ending the game. The last player to successfully set up the tracks is the winner. It sounds easy but the challenge comes in being able to position the tracks on time before the train arrives. It also helps you can drag the tracks with one finger so it’s comfortable to play for long stretches.

There are different backgrounds ranging from forests, deserts, plains and more. In some cases you’ll need to blow stuff up to keep the train moving, which adds to the fun. Gameplay is smooth and provided you’ve got a reliable W-Fi network connection there should be no problems. With its striking graphics and engaging nature, Train Party should keep you and your buddies chugging along.