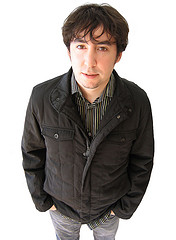 Brad Sucks: Out of It

Brad Sucks has been writing, recording & giving out his music free on the internet since 2001. He started with releasing singles widely ranging in style: from catchy up-tempo sort-of-dance like compositions through harder rock to more laid back songs. Within the next few years he has earned himself a steady and constantly growing fan base and became an internet celebrity of sorts. In 2003 he’s signed up with a progressive record label – Magnatune – and released his first album entitled “I Don’t Know What I’m Doing”. After playing some live shows, Brad went back to recording in 2008 and released his latest album “Out of It” in September.

The self-produced debut 12 song set has been very well received and got a great deal of airplay around the world, especially in Australia, the UK and the Caribbean. As the album was getting more and more popular, the songs have been used in countless student films, remixed several hundred times (spawned two remix albums) and licensed in quite a few commercials.

Encouraged by the success, by 2005 Brad gathered together a band (enlisting a guitarist Rob Cosh, drummer Bruce Spence and bassist Richard Nash) to adopt his solo album to the stage and traveled around performing live for a while.

“Out of It” was a long awaited follow-up to Brad’s debut album. It was released in September 2008 and it immediately became a hit among his fans. The witty lyrics, hard-hitting drums and heavy guitars was exactly what they wanted. Even though he keeps calling himself “a one man band with no fans”, he probably has more fans that he realizes – he has more than 100,000 listens to his album on Jamendo, MySpace and more than 400,000 on LastFM.

There are some great hidden gems in this album package. The title track “Out of It” (track 9) features an Internet-orchestrated sing-a-long with recordings submitted by fans, followers and musicians, just like the music video for “Fake It” (track 3 – YouTube video below) was created out of footage submitted by YouTube users. Brad has included the lyrics to all his songs, so you can sing along with him. If that wouldn’t be enough, “Out of It” (just like “I Don’t Know What I’m Doing”) is licensed under Creative Commons Attribution-Share Alike 3.0 License, which means you can download, share & remix his music, as long as you provide him the appropriate credit and distribute your work under a similar license.

You can buy the album on Brad’s Website, or if you’ve already got it through here but would still like to contribute, you can: leave him a tip = donate via PayPal and get a Brad Sucks button, buy Brad a mood altering substance or get yourself a cool t-shirt.

Brad has recently decided to post one free song on his website every month, so make sure you check out his music often. And don’t forget to leave Brad & us a comment if you like the album! Enjoy!