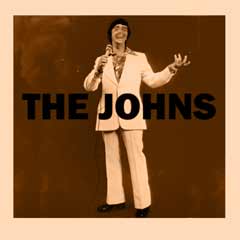 The Johns is a Chicago based indie rock band composed of four life-long friends who are determined to keep their music independent of popular trends and opinions of others. “[They] aim to proceed as an undefinable sort of pop music, drawing from a history of playing metal, jazz, funk, blues, folk and art rock and pulling from influences as varied as Neil Young, Mike Patton, Television, tin-pan alley jazz, The Police, Les Paul & Mary Ford and onwards and upwards.”

They’ve played together in different bands for years, but they’ve considered themselves The Johns only since 2007. The band name is about anonymity but it seems that it could also be directly related (at least in some extent) to Jon Scarpelli’s, the vocalist’s, previous employment. “I used to deliver portable toilets,” says Jon, “so I have a great relationship with Johns… And at the time that I thought of it, it was suppose to be ironic because about three years ago all bands seemed to get names with “The Something” in them.

Back in 2007 all four got together, released their first EP entitled “The Johns E.P.” and started performing shows all over Chicago. Later that fall they’ve been invited to play a set in front of 15,000 people for the Red Sox World Series rally in Boston. Foresight/Poorsight was released at the end of March and was their first studio album.

The songs {in this album] are about a tendency to gravitate towards an idea or concept or a situation where logic and emotions meet at a point where they are both valid, both conflicting and both happening at the same time. That’s kind of the things I am most interested in – the kind of irony of serious situations and the unavoidable folly of trying to reason your way through the spiritual world.

Like most of musicians/songwriters, the Johns don’t like to categorize their repertoire. Jon likes to talk more about their attitude, motivation and the outlook on creativity rather than musical genres. They have “the kind of the believe that Neil Young has of his work as simple expressions of himself and people in time, taken with the kind of the more modern approach to things”, he says. They like to use more electronic sounds, more overdubs than Neil Young would have, but they also try to compose and craft as much as possible too – kind of like the Beatles.

The “Foresight/Poorsight” album is licensed under the Creative Commons Attribution-No Derivative Works 3.0 United States License, which means that you can download and share the album with everybody you know absolutely free as long as you give the band credit for their work. The only thing you can’t do with it is to remix it without the band’s permission. Jon explained that the Creative Commons license is a good fit for the them because they are a very small band with little resources and the only way they can promote themselves successfully is to give the album out to as many people as possible and hope they will spread the word and come to the shows.

If you like the music, email the link to your friends and burn some CDs for your family – that’s the best way to repay the band for the free album.