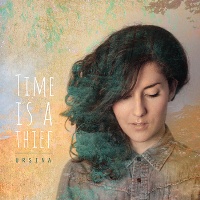 Ursina: Time is a Thief EP

Buckle-up as Swiss singer-songwriter Ursina journey to new musical avenues. Released last April 26, 2013, Time is a Thief is a four-track EP that reinvents folk pop with a fresh kick.

Welcoming our ears is One Foot, an eccentric jungle of trumpet, tomboy, harmonium that produces an trip-hop piece with a theatrical flair. Breakout follows with a stripped down guitar ensemble. Ursina’s voice stretches and belts into an ambient heaven of solid goodness.

Treating the audience with Swedish lyrics, La Stad Ei Vargada is a soothing ensemble with soft cooing melodies. Rhythmic drum beats closes up the album in Time is a Thief. This must-hear piece is shrouded with aired vocals and thick guitar strums that channels a surf pop vibe.