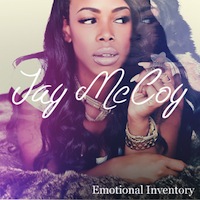 Jay McCoy reminds people how ferocious her presence can be in Emotional Inventory released last October. This collection of eight tracks puts up a flavorful spread from the soul siren.

Hailing from Oakland, California, Jay McCoy (born Jamie J. Jackson and legally changed it to “Jamiee”) came from deep musical roots. Her dream of becoming a singer solidified when she released an album under a local Bay Area label during her sophomore year.

In 2003, Jamiee earned local recognition and was able to work with artists and producers such as The Team, Traxamillion, Rob-E, and many more. After taking a short musical break, Jamiee has her eyes set on the pop/r&b scene, climbing the ladder inch by inch through her uptempo jams.

Emotional Inventory opens up with Closure. This track encapsulates sensuality in so many levels. Jay McCoy’s soulful vocals is accentuated with perfectly placed-beats to elicit that right kind of groove.

Rock With Me featuring Erk Tha Jerk gets my vote as the standout track as it succeeds in raw talent and flawless production. Though it came from the same mold and vibe as of the previous song, this piece still maintains its own beauty with soothing vocals set amidst r&b and hip hop musings.

Even though it has a short title, 2 U definitely doesn’t lack in style. Listen as extending electro beats escalate into an upbeat delight. So Into You featuring D. Bledsoe is a pleasurable hiphop and r&b combo perfect for chillin’ in the dance floor.

In Emotional Inventory, Jay McCoy has collected pieces of her emotions and heartbreaks to create pure, introspective tracks that appeals to new and old listeners.