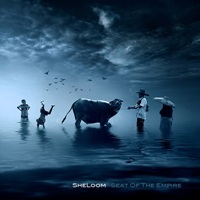 SheLoom: Seat of the Empire

Hard-hitting masters of their genre, SheLoom pumps out ten introspective pop-driven pieces for easy listening. In this album, the Oregon-based alternative pop band treats us with elements of new wave and ’70s pop reminiscent of Midlake, Wilco, Tahiti 80, Genesis, and Yes. SheLoom is Filippo Gaetani, Eric Matthews, and Jordon Zadorozny.

Bolero‘s intro depicts a seesaw battle between loud drum beats and tone-down electric guitars. This arrangement then shifts to a pop-infused arrangement and clear vocals. The stomps and hand-clapping beats add a new dimension of flavor to this lovely track.

An ideal soundtrack for summer road trips, Someday Suddenly is an easy-listening piece that’s laden with the right amount of riffs and beats. The carefree vocals play a key role in conveying laidback feels to the listeners.

All For Love finishes off the album with a low-key riffs and touches of chimes. The distinct reverberating vocals spins a dark energy to this slow piece.

In Seat Of The Empire, SheLoom drives us into sharp, guitar-propelled melodies that are street-shuffle worthy.