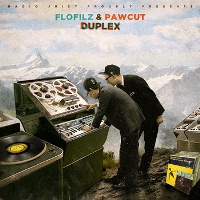 Simply put, FloFilz and Pawcut are members of the group called RadioJuicy. Not much has been said for the two of them other than that they both come from Germany and that they create really dope hip hop beats. The latter statement is what we really should ponder upon.

Duplex is a twenty-one-track compilation of perfectly crafted beats and harmony. Compared to its contemporaries, it doesn’t indulge you into the dark and eerie side of instrumental hip hop but rather, it treats you to a wonderful world of interlaced melodies and tunes. It combines traditional styles of rhythmic patterns and modern experimental dub step.

Some of the tracks would seem familiar to your ears but FloFilz and Pawcut added just the right amount of variation to keep the song stuck in your head. The album is simple and easy to listen to but it also offers the complexities and intricacies a music aficionado will look for.

I guess one of the reasons FloFilz and Pawcut decided to tell less about themselves is that because the music that they create is more than enough for us to know them. Duplex is a must hear album not only for hip hop fans but to everyone who appreciate good sounds.