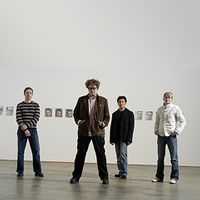 From “Little by Little” Press Release:

A brief refresher: Harvey Danger formed in Seattle in 1994. Their first
record, Where Have All the Merrymakers Gone?, released on Brooklyn’s tiny
Arena Rock Recording Company, became a surprise smash when the song
“Flagpole Sitta” became an inescapable summer staple on commercial
radio and MTV in 1998. The record, which cost about $3,000 to make, was
re-released by a major label (Slash/London) and eventually sold half a
million copies. The follow-up, King James Version (London/Sire), was
released in September 2000 (exactly five years and one day before the
release of Little By Little…, as it happens). While the sophomore effort was
nowhere near as successful as its predecessor (it’s a long story…), KJV
maintains a surprisingly strong cult following despite being out of print.

Given our unusual history, and a long-held sense that the practice now being demonized by the music biz as “illegal” file sharing can be a friend to the independent musician, we have decided to embrace the indisputable fact of music in the 21st century, put our money where our mouth is, and make our record, Little By Little…, available for download via Bittorrent, and at our website. We’re not streaming, or offering 30-second song samples, or annoying you with digital rights management software; we’re putting up the whole record, for free, forever. Full stop. Please help yourself; if you like it, please share with friends.

To read more in detail about the reasons why Harvey Danger decided to release their album for free read on here.