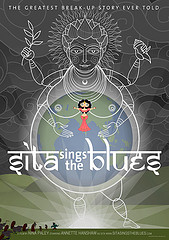 Sita is a Hindu goddess, the leading lady of India’s epic the Ramayana and a dutiful wife who follows her husband Rama on a 14 year exile to a forest, only to be kidnapped by an evil king from Sri Lanka. Despite remaining faithful to her husband, Sita is put through many tests. Nina (the filmmaker Nina Paley herself) is an artist who finds parallels in Sita’s life when her husband – in India on a work project – decides to break up their marriage and dump her via email. Three hilarious Indonesian shadow puppets with Indian accents – linking the popularity of the Ramayana from India all the way to the Far East – narrate both the ancient tragedy and modern comedy in this beautifully animated interpretation of the epic.

In her first feature length film, Paley juxtaposes multiple narrative and visual styles to create a highly entertaining yet moving vision of the Ramayana. Musical numbers choreographed to the 1920’s jazz vocals of Annette Hanshaw feature a cast of hundreds: flying monkeys, evil monsters, gods, goddesses, warriors, sages, and winged eyeballs. A tale of truth, justice and a woman’s cry for equal treatment.

Nina Paley has released this movie under a Creative Commons Attribution-Share Alike License giving everybody a free hand to distribute, copy, share, archive, and show “Sita Sings the Blues” to the public. As she said, “from the shared culture it came, and back into the shared culture it goes.” The story is a bit sad though, because in order to do so, Nina Paley had to pay off the monopoly holders for some of the music used in the film (even though the songs were written as early as 1920s!). The approximate cost is about $50,000 and Nina is taking out a loan to cover the expenses. QuestionCopyright.org has organized a donation page to help with paying of that loan – they’ve already collected over $7,000 towards the goal. All funds raised go directly to this project, so if you would like to make a directed donation to the Sita Distribution Project click here.

The movie will be shown today, Sat March 7th on the NY PBS station at 10:45pm (you can ask your local PBS station to broadcast it for your community!) It will also be shown all around the world at movie festivals & screenings. Click here for the full listing.

If you would like to find out more about the movie and it’s creator follow the links below and let us know how you liked it by leaving a comment.